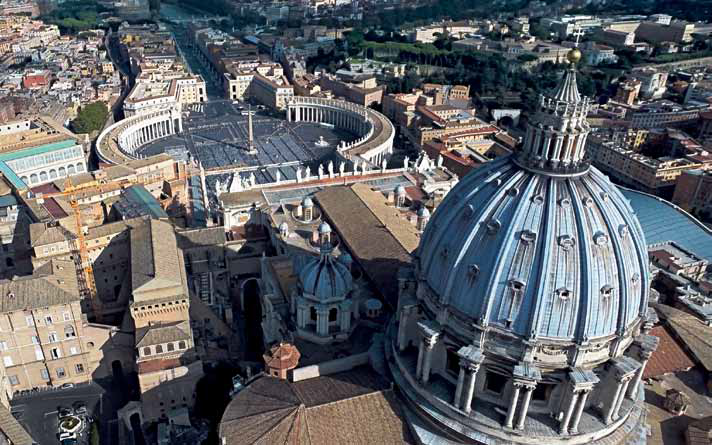 When it came time to install the different elements of the system, Carrier was confronted with several unique challenges that needed to be overcome: the geometry of the space, the weight and size of the equipment, and the historical significance of the building. “In working with the Vatican we understood that we would not be able to penetrate into the walls or even use the space in the attic,” recalls Bill Chadwick, senior systems engineer, AdvanTE3C Solutions Center, UTC Building & Industrial Systems. “It really pointed out how much of a monument this was.”

Michel Grabon confirms: “For the installation we were limited to the existing openings. We couldn’t move or reshape a single stone that had been there since the beginning. It was these kinds of limitations that required inventive solutions on our part.”

Placing nearly 50 tons of material on the rooftops adjacent to the Sistine Chapel was another considerable factor. “Before installing the machines, we had to make sure the terraces could bear the load,” says Rev. Rafael Garcìa de la Serrana Villalobos. “In studying how the building was made, we realized we needed to reinforce the roofing structure to support the weight of the air handling units, the dry coolers and the machine rooms.”

Once it was clear that the structure would be able to bear the weight and the temporary HVAC system was up and running, the existing pumps, compressors and ductwork were removed. Then, using the duct access openings created in the 1990s, the new system was put into place. When the work was complete, the temporary system was removed and the new system launched in October 2014.

How To Fix Sick Building Syndrome With Adequate Ventilation

How important is adequate ventilation within the office environment? When it comes to the matter of “sick building syndrome,” the... read more

The success of a project is measured by the result. In the case of the iconic PWC Tower design... read more

In order to deliver its very best intoxicating flavour, the role of temperature during the winemaking process needs to... read more

Our Range Of Controls Puts The Power In Your Hands

The ability to control things remotely is one of the most important benefits of 21st-century convenience technology. And while... read more

Art is a universal expression of culture, and it’s incredibly important to preserve significant works for future generations. This... read more

Whether you’re involved in a new building or a refit, the correct design and product selection of the building... read more

The benefits of water cooled chillers

At Carrier, we’ve established ourselves globally, as leaders in commercial and industrial air conditioning systems. We offer a range... read more

It is often said that “Necessity is the mother of invention” which proved true for American engineer, Willis Carrier,... read more

We have exactly what you need!

Carrier delivers global solutions across a broad range of applications in heating, air-conditioning, refrigeration and beyond. Download our latest product brochures to learn more about our product offering.

Carrier is proud to have been a part of the following prestigious installations around the world.

Innovation is in the Air